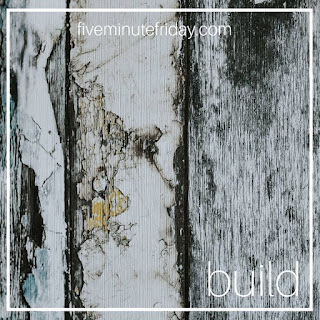 Each week, the instructions from Kate Motaung link says: "Write for five minutes on the word of the week. This is meant to be a free write, which means: no editing, no over-thinking, no worrying about perfect grammar or punctuation. Just write."

I going to build on something from our week.

Our week was half over, it was HUMP Day.

A call came that got my heart beating faster and faster. As that feeling of something was wrong built up inside me, the call dropped. I could hear her, I could hear something was wrong, but she couldn't hear me. Then silence. Call back, the same thing. Over the next few minutes of hit and miss with our call, my heart is sinking because it hit me, I think someone broke into our office!

"Amber!" "Mom!" "Amber!" "Mom!" I think, oh shoot, someone has been in the office. Through our uncooperating phones, she was trying to ask if dad and I had stopped in the evening before, as things were out of sorts. Just as I am about to tell her, she says, "Dad laptop is gone!"

In a matter of 5 minutes, the build-up of so many thoughts, and emotions had to be dealt with, First. Things. First. Call the police. From there each step, each breath, takes on the tasks of getting what they didn't take, secured.

A list of what was missing and fingerprints were taken off the many items they had touched.

Our building is old.

I've noticed the door hasn't always been latching. Add in, it was a very windy evening, my first thoughts were that DAMN DOOR!!!

No, she knew for a fact that it was secured. She retraced her steps, over and over, and each time it's concluded some broke in!!!

Someone had ruffled through our business!

Things can be replaced.

A note was found that said I door was found open at 11:36 PM, and whoever it was closed the door.

It could have been worse.

Build Your House on the Rock